His plans are out of this world! 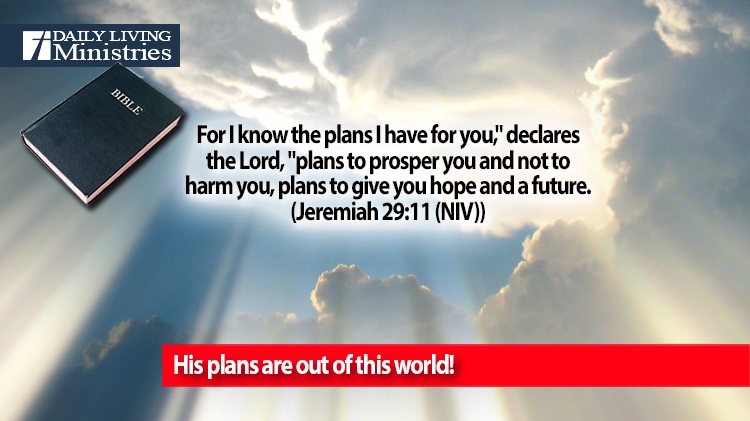 For I know the plans I have for you,” declares the Lord, “plans to prosper you and not to harm you, plans to give you hope and a future.
(Jeremiah 29:11 (NIV))

Do you feel like you have hope and a future?

Your answer to that question is all a matter of perspective.

“I have told you these things, so that in me you may have peace. In this world you will have trouble. But take heart! I have overcome the world.”
(John 16:33 (NIV))

The words from Jeremiah were recorded when many had been carried into exile from Jerusalem to Babylon. In essence, they were taken captive and taken to another country. Babylon was not a country you went to for a vacation. They took captives from all of the lands that they had defeated in war. They attacked the other countries in order to extend their kingdom! The words recorded within Jeremiah were a promise to those who were in the midst of very difficult times. They were a promise from the Lord that He still had plans for them. He still knew what the future held even though the people in captivity could see no possible reason to have any hope.

The Lord is still saying this today to those who call upon His name!

He has plans for us. He has given us a hope far greater than the promise of the hope that He gave to the exiles. They were looking for freedom in the physical world. We have been given freedom from the consequences of our sins. He has such amazing plans for those who call upon His name. We should know a peace that passes all understanding even in the midst of the chaos of this world. Our peace comes from the One who has overcome the world by defeating sin and death. Our true prosperity is coming as we are given an eternity in His presence.

His plans are out of this world!

This entry was posted on Friday, July 22nd, 2022 at 3:02 am and is filed under Uncategorized. You can follow any responses to this entry through the RSS 2.0 feed. You can leave a response, or trackback from your own site.