Do you long for the sacred times with the Lord? 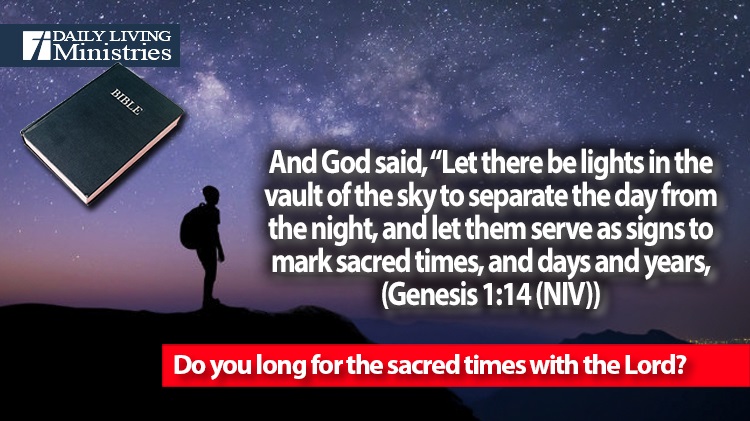 How do you plan and track the events in your life?

If you are like everyone else in the modern world, you plan things on a calendar and even perhaps on a digital calendar down to the year, month, day, hour and minute. You look at the calendar and know how far away a certain event will be. You trust that calendar and your clocks to tell you when something is to happen. For those who have ever owned, or knew someone who owned a very intricate grandfather clock, you know the precision movement of the mechanical pieces that track the time. Some even will track years, months and days. I believe that this passage from Genesis tells us that God has created such a calendar in the heavens with a more precise movement and accuracy than anything that humanity has imagined.

The sad thing is that we try to impose our calendar, along with our will, on God!

We try to force God and His majestic splendor into a box that we define so that we can try to understand Him. Ironically, we even do this when we look to the Lord for the things that He has promised are yet to happen. We read His Word and see what He has laid out according to His Will and then we try to figure out everything according to our understanding and our calendar. Just as you and I cannot truly understand the inner mechanical workings of a fine Swiss watch, we cannot fully understand the more intricate workings of God’s calendar. Even the closest man-made calendar is not perfectly aligned with God’s calendar. There is disagreement as to the accuracy of the current Hebrew calendar, and that was man’s attempt at following what was given to us by God!

It is my prayer that we, as the Body of Christ, learn to submit our desires to God’s Will and to His calendar.

I realize that we long to see the Lord, but we cannot see God’s calendar from His perspective. He has set everything in motion and we are simply called to be obedient until He comes. We must stand firm in our faith and keep our eyes focused on Jesus. One day soon we will see God’s calendar from a different perspective. The day will come that He takes us to be with Him. That is a sacred time that I am sure He has marked in His calendar that He spoke of in Genesis, the lights in the vault of the sky.

Do you long for the sacred times with the Lord?

How do you see the things of God?

Did you watch the solar eclipse? Are you glad that it is over? If you are like the majority of people in the United States, you have seen enough information about the solar eclipse to where you could probably write your own research paper solely from memory. To be honest with you, it was an amazing event to see.

I find it interesting that humanity is so obsessed with these types of events, yet they fail to recognize that these types of events are clearly defined and foretold in the Bible. Society tries to explain them based on scientific reasoning. Please don’t misunderstand me and try to draw any false implications. There is nothing wrong with science. Science allows us to explore and try to understand creation. It allows us to form a hypothesis about a particular subject and then test that hypothesis to see if it is accurate. Over the course of human history, scientific conclusions have often changed when addressing the same subject. In essence, a hypothesis is only an assumption that someone makes for the sake of argument. They then have to defend that assumption. What I find so perplexing, based on this definition, is that when someone comes to a different assumption and tries to have a civil argument over the different assumption, someone is always labeled as ignorant and uneducated. Based on historical record and the very definition of hypothesis, science is man’s attempt to correctly explain what we see when how we interpret what we see is influenced by our less than perfect ability to perceive the truth.

The solar eclipse was a fantastic example of humanity trying to explain what we see when what we see is so far beyond our comprehension. If Jesus delays His return, humanity might get better at explaining things. However, we will never understand creation the way that the Creator does. If God said that something is to serve as signs, then we should take that at face value. I, like may people, are intrigued by the “how” with respect to what God does, but it will never be more important than the “why.”

As the heavens are higher than the earth, so are my ways higher than your ways and my thoughts than your thoughts.
(Isaiah 55:9 (NIV))

How do you see the things of God?

Will you be watching to see what God does?

A great sign appeared in heaven: a woman clothed with the sun, with the moon under her feet and a crown of twelve stars on her head. She was pregnant and cried out in pain as she was about to give birth.
(Revelation 12:1-2 (NIV))

Do you believe in signs and wonders in the heavens? God does!

He planned it that way!

How many noticed that they are to serve as signs for three distinct things? The first, and most prominent, is for marking sacred times. If that is the case, then when we are told that there will be a great sign, how should we react? How should we approach such an event?

For those who don’t know, there is a direct correlation between what is described and certain stars and planets in the zodiac. The woman is Virgo. The king planet, Jupiter, is the child that she carries. The crown is a combination of stars and planets, and the moon is under her feet. According to various sources, this has never happened before, will only happen once, and will never happen again. That one time that it will happen is later in 2017 and many are calling it the convergence. Everything lines up perfectly for this great sign to appear. It also lines up with the next Jewish feast in God’s timeline.

I, for one, will be watching this great sign with much fascination. I am not date setting. I am being observant, for as a follower of Jesus, we are to know the seasons. When God tells us that there will be a great sign, and we are also told by scientists and astronomers that this sign will only happen once in all of eternity, then we should pay attention. We should really pay attention since it will happen in our lifetimes. I just love how, as time passes, God unveils Himself and presents Himself just as He foretold. With that in mind, I will be watching the heavens as God’s plan unfolds.

Will you be watching to see what God does?

(If you wish to study this for yourself, I recommend doing a search for Revelation 12 on YouTube as a starting point.)