We must never take our eyes off of Jesus! 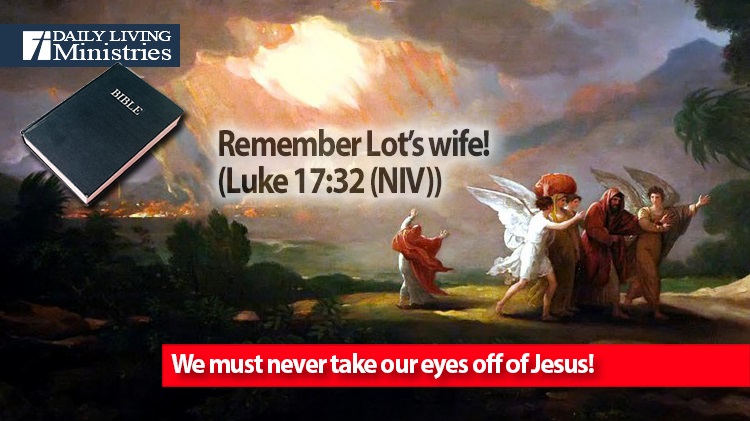 Why do you think that Jesus told His disciples to remember a woman who was turned into a pillar of salt?

If you say that it was because she looked back you are on the right track, but it there more to this?

Jesus was telling His disciples how the events will unfold in the days of the Son of Man. He first used lightning as a reference, and then He spoke of the days of Noah. His third example was that of the days of Lot. Lot, his two daughters, and his wife were physically taken out of the city by the angels who had stayed there. They were snatched out of certain destruction and in much the same way that we believe the church will be raptured.

I have recently seen a video series that discussed this very topic as a foreshadowing of the church. When Abraham and Lot parted ways, Lot chose to go to the valley where Sodom and Gomorrah were located. Before their destruction, this valley was like the Garden of Eden. Lot chose to live there and even though he was found to be righteous, he and his family had ties to the area. It was their life. Keep in mind that the reason Abraham and Lot parted ways was because the size of their flocks and their servants had grown too large for them to stay together. In the story of Sodom and Gomorrah’s destruction, all that we hear about are four people: Lot, his two daughters, and his wife. Perhaps they had family or friends whom they cared about that were still in the city. Perhaps the flocks and the servants were still there. Perhaps Lot’s wife looked back to see if anyone could have survived. Perhaps she turned back because she couldn’t stand the thought of leaving people behind whom she cared about. Perhaps she had grown accustom to her life there and simply did not want to lose it. All of these things are characteristics that we have probably all had at some point in our lives.

We must never take our eyes off of Jesus!