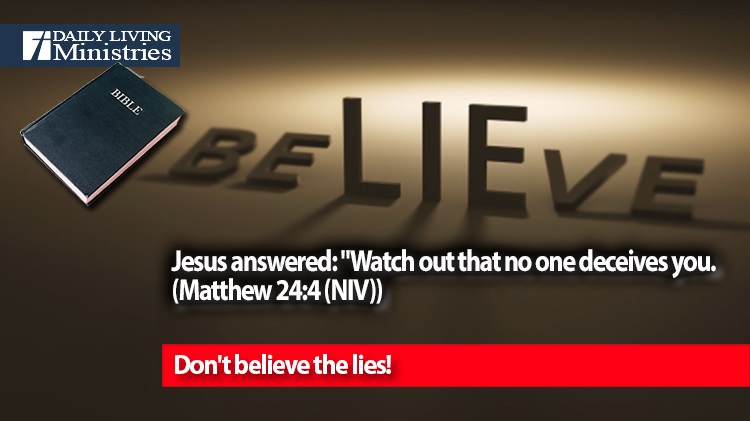 We are constantly on the lookout for SPAM, PHISHing attempts, and fraudulent credit card charges. We have come to understand that this is now the world in which we live. We spend so much time dealing with these type of deceptions and how they could harm us, that we never truly stop to reflect on the biggest deceptions that are going on in the world right now. These deceptions could have such a far greater impact on us than we even stop to consider.

If you are not able to give detailed accounts for these questions, how do you plan on overcoming the biggest deceptions that your faith will face?

Let’s look at this mathematically based on the following assumption: God’s Word is true. It is infallible. It is what we can label as 100% accurate.

Too many people fail to recognize the ramifications of a slight variance in God’s Word. If something doesn’t sound completely true, then it is not the truth. If someone twists God’s Word, then it is no longer God’s Word.

The enemy will try to deceive the very elect. We must be able to recognize the truth for our eternity depends upon it!

Stand firm in His truth! Don’t believe the lies!

Jesus knew that strange times would come and that people would potentially be deceived by what would be happening. He told His disciples point blank to be on their guard so that they, and we, would not be deceived when situations arise. We must stand firm in our faith and be firmly rooted in God’s Word so that we can recognize false teachings when they are presented to us. It is my prayer that we will be so firmly grounded in God’s Word that we will instantly know the enemy’s attempts to deceive us when we see them. You have to realize that the enemy knows God’s Word and can twist it in ways that are designed to confuse those who are not totally immersed in God’s truth. Consider that the serpent tricked Adam and Eve by twisting the truth in the Garden of Eden. Adam and Eve walked with God. They knew Him in a way that we can’t possibly know God today. Still, they fell for the deception that the serpent used, and humanity has been paying the price ever since that day!

The enemy uses things out of context, or just a partial quote of scripture. He will twist just enough of God’s Word so that it still sounds right, but with the subtle change, it is now a lie. Consider what happens if he leaves out the last instructions from Jesus to the woman caught in adultery.

At this, those who heard began to go away one at a time, the older ones first, until only Jesus was left, with the woman still standing there. Jesus straightened up and asked her, “Woman, where are they? Has no one condemned you?”
“No one, sir,” she said.
“Then neither do I condemn you,” Jesus declared. “Go now and leave your life of sin.”
(John 8:9-11 (NIV))

If you twist this passage by removing “Go now and leave your life of sin,” it takes on a whole new meaning. It takes on a meaning completely opposite of what Jesus truly said and meant. Without those eight words, it sounds as if Jesus is telling the woman that whatever she does is okay, when what He is really saying is that she must repent and change her ways. The whole passage, when twisted like this, is now able to be a lie from the mouth of the enemy.

We must not take things at face value. We must know God’s Word. We must search God’s Word for verification and not for our sinful gratification. We must be Bereans!

Now the Berean Jews were of more noble character than those in Thessalonica, for they received the message with great eagerness and examined the Scriptures every day to see if what Paul said was true.
(Acts 17:11 (NIV))

When someone is not educated in certain aspects of life, it is easy for them to be deceived in those areas. With everything that is going on in the world, be very careful with respect to what you embrace as truth. When you are firmly grounded in God’s Word, the Holy Spirit will be in communication with your spirit. Allow the Holy Spirit to guide you through the subtle lies of the enemy.

What scripture is being fulfilled today?

“The Spirit of the Lord is on me,
because he has anointed me
to preach good news to the poor.
He has sent me to proclaim freedom for the prisoners
and recovery of sight for the blind,
to release the oppressed,
to proclaim the year of the Lord’s favor.”

Then he rolled up the scroll, gave it back to the attendant and sat down. The eyes of everyone in the synagogue were fastened on him, and he began by saying to them, “Today this scripture is fulfilled in your hearing.”
(Luke 4:18-21 (NIV))

For hundreds of years, the nation of Israel literally waited for the fulfillment of the prophecy foretold in these words. Yet, as it unfolded right before them, most did not recognize what they had been waiting for. They did not recognize it for they had become so wrapped up in their interpretation of how it would happen, that they did not see God’s interpretation as it unfolded.

If we had been alive at this time, would we have recognized the fulfillment of this prophecy or would we have been like the majority of people? Perhaps even more important is our perception and understanding of what is to come in our life time. We have the luxury of being able to look back through history and see the events as they unfolded. We can recognize the events in hind sight, but how will we be in recognizing the events that are unfolding right before our very eyes?

Jesus will return. He will come for His church when the time is right.

Jesus answered: “Watch out that no one deceives you. For many will come in my name, claiming, `I am the Christ, ‘ and will deceive many. You will hear of wars and rumors of wars, but see to it that you are not alarmed. Such things must happen, but the end is still to come. Nation will rise against nation, and kingdom against kingdom. There will be famines and earthquakes in various places. All these are the beginning of birth pains.
(Matthew 24:4-8 (NIV))

What scripture is being fulfilled today? What do we look for that is our interpretation of these events? We must focus on God’s Word so that we truly understand God’s interpretation and not our own.

I know that I don’t want to be one who watches things unfold and I miss out on what God is doing because I have my own interpretation. I want to know God’s plans and His heart so that I may see things through His eyes.

God is setting the world’s stage for some amazing events. I don’t want to misunderstand any of them. What scripture is being fulfilled today?

He who was seated on the throne said, “I am making everything new!” Then he said, “Write this down, for these words are trustworthy and true.”
(Revelation 21:5 (NIV))

We are between the Creation and the re-creation that this passage speaks of. Exactly where we are is only known to God, but we are given some insight into which end of the timeline we are living in.

Jesus answered: “Watch out that no one deceives you. For many will come in my name, claiming, `I am the Christ, ‘ and will deceive many. You will hear of wars and rumors of wars, but see to it that you are not alarmed. Such things must happen, but the end is still to come. Nation will rise against nation, and kingdom against kingdom. There will be famines and earthquakes in various places. All these are the beginning of birth pains.
(Matthew 24:4-8 (NIV))

With all of the events in the world at this time, we are seeing wars and rumors of wars. We are seeing conflicts that only a few short years ago would have been considered atrocities and would not have happened. Now we see innocent children brutally murdered all in the name of a “holy war.”

I do not venture to say that I have any insight into what is in God’s timeline. All I know is that each of us must be ready to be the witness for God that He calls us to be in these uncertain times.

are you ready, birth pains, creation, deception, earthquakes, famines, God, God will make everything new, God's throne, Jesus, kingdom against kingdom, nation will rise against nation, trustworthy and true, wars and rumors of wars | Tagged: are you ready, atrocities, Be still, beginning of birth pains, conflict, creation, deceives, earthquakes, famines, God, holy war, I am making everything new, I am the Christ, Jesus, kingdom against kingdom, murdered, nation will rise against nation, rumors of wars, throne, trustworthy and true, wars |

Have we become the very people that Jesus told us about?

Jesus said to them: “Watch out that no one deceives you. Many will come in my name, claiming, `I am he,’ and will deceive many. When you hear of wars and rumors of wars, do not be alarmed. Such things must happen, but the end is still to come. Nation will rise against nation, and kingdom against kingdom. There will be earthquakes in various places, and famines. These are the beginning of birth pains.
(Mark 13:5-8 (NIV))

Are you holding fast to your faith? Are you secure enough in your faith and understanding to not be deceived?

Now, I want you to think about something.

Nation will rise against nation, and kingdom against kingdom.

Our understanding of a nation today is very different from what it was when this was written. A nation has always referred to a group of people, such as the Israelites or Canaanites. What we think of as a nation today is a political kingdom in the Bible. In other words, we are told that different people groups will fight each other. We see this escalating in today’s world with the cries of racism in our country. We see members of each group of people straining the bonds that we should all have through Jesus. We see riots between different people groups within our own political kingdoms. We see political kingdoms at odds with each other.

In essence, we are all rising against each other.

Have we become the very people that Jesus told us about?

Are we being deceived by false teachings and deliberate lies so that we will be a part of what Satan is doing in this world? There are far too many things going on in this world to keep up with all of them, but I do know that what I see appears to hold true all across the world. There are wars and rumors of wars. There are fights between different people groups and there are other things happening that simply make me wonder how humanity has become so depraved so fast.