Freedom always has a cost! 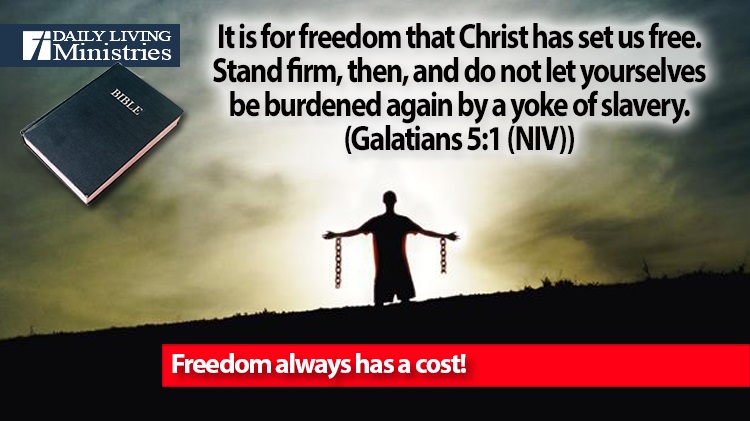 It is for freedom that Christ has set us free. Stand firm, then, and do not let yourselves be burdened again by a yoke of slavery.
(Galatians 5:1 (NIV))

What is the difference between freedom and independence?

Do you think that they are the same?

We, as a nation, just celebrated the anniversary of our independence from rule by another country. Is this the same as freedom?

We, as believers, celebrate the fact that we have been set free from the bondage of sin and death. We are no longer bound by the sins that shackled us. Is this the same as independence?

One of the definitions for the word freedom says that it is a state of being free from confinement or physical restraint. One of the definitions for the word independence says that it is freedom from the control or influence of others. I find it interesting that the word freedom is used in the definition of independence. I also find it interesting that this country was settled be those seeking freedom to worship God as they saw fit. They may not have all faced physical restraint, yet they were restrained in other ways. These people faced persecution because they did not believe as the official church dictated that they believe. In the course of seeking their freedom to worship, they gained their independence. They were no longer controlled by others.

Over the course of many years, the freedom that was sought for became a desire to be independent.

Do you see the trend?

When we seek freedom, independence is earned. When we give up freedom, independence is taken away. This is true for both the physical and the spiritual. If we accept Jesus as our personal Lord and Savior, we are set free from the bondage of sin and death. If we allow a small foothold to sin, we are once again burdened by what we had previously cast off. I honestly believe that this holds true for all aspects of our lives, and not just our individual spiritual lives.

Think about that for a moment.

Freedom isn’t free. It has a heavy cost.

Jesus died on the cross to be able to set us free from sin. Countless people throughout our history have died to ensure that our freedoms remain. Have we become a consumer of the actions of others? Are we willing to sit back and observe or do we embrace the freedom and the price that has been paid and must be paid? Do we change our thoughts as easily as we change the channel? Do we stand firm in God’s Word or do we let others fill us with their thoughts?

Remember that Jesus paid the ultimate sacrifice so that we could be given salvation. Thousands of men and women since then have paid the price for physical freedom so that we may enjoy and embrace the freedoms that Jesus gave us through the cross. Are we willing to simply sit on the sidelines or will we stand firm in our faith and in our freedom?

Freedom always has a cost!

This entry was posted on Monday, July 5th, 2021 at 2:38 am and is filed under Uncategorized. You can follow any responses to this entry through the RSS 2.0 feed. You can leave a response, or trackback from your own site.